Canada is a massive country. At 9.985 million km² (3.855 million mi²) it is second in size only to Russia. It has the largest coastline of any nation in the world at 243,042 km (151,019 mi), and touches three oceans: the Pacific, the Atlantic, and the Arctic. To travel from one side of the country to the other would take an astounding 61 hours of straight driving.

And yet for all its size, Canada is only bordered by one other nation: the United States of America. At least, that’s most people would tell you. Upon further investigation, you’ll actually find that Canada shares a border with two other countries: The Kingdom of Denmark, and France.

Located just 25 kilometers (16 mi) off the coast of the Canadian Province of Newfoundland and Labrador, the island of St. Pierre and Miquelon is the last remaining piece of a once large French colonial presence in North America. It covers an area of just 242 square kilometres (93 sq mi), and has a population of just over 6,000 people. The island also operates in its own time zone, (UTC-3) 30 minutes ahead of its Canadian counterpart. (UTC-3).

Despite St. Pierre and Miquelon’s close proximity to Canada, this overseas territory retains complete French sovereignty. Residents have French citizenship, cars have European license plates, and all business is conducted in the Euro. To get to St. Pierre and Miquelon, there is a ferry that runs regularly to and from Fortune, Newfoundland, with the crossing taking about 90 minutes.

According to Newfoundland and Labrador Tourism, St. Pierre and Miquelon has managed to surprisingly stay culturally unique from its North American neighbors, and retains a striking similarity and dedication to the French Mainland. As Newfoundland Tourism says, St. Pierre isn’t like France, it is France.

It may seem obvious, but you’ll need a passport to visit the island, and will need to clear customs just like any other international border. Although throughout history there have been a number of maritime border disputes between France and Canada over this overseas territory, mainly due to fishing rights, in 1992 an international arbitration committee finally settled on the official maritime boundary which is seen today.

Canada and the Kingdom of Denmark share the longest maritime border in the world at 2,646 kilometres, (1,644 mi) thanks to the Danish territory of Greenland. As with St. Pierre and Miquelon, there has been a history of countering border disputes between the exact location of each nation’s boundary. In 1972, these disputes were finally settled in a bilateral agreement; that is however, except for one small island located in the Nares Strait, just south of the Arctic Ocean. This place is known as Hans Island.

The Indigenous Inuit populations of Canada and Greenland have been using Hans Island as part of their traditional hunting grounds for centuries, long before Europeans even made their first presence known in North America, but other than that, the island doesn’t really provide any significant economic, strategic, or historical value to either Canada or Denmark.

Since then, both countries have traded bottles of liquor on occasional visits to the disputed territory, thus earning the conflict the fitting nickname of the Whisky Wars. Recently, there have been efforts to resolve the border dispute once and for all, although nothing has been formally agreed on as of writing this post. One such suggestion is to make Hans Island a condominium, or a shared piece of land between the two nations. One island, flying under two different flags.

UPDATE: Since the publication of this post, Canada and Denmark have since come to a mutual agreement for a new land border on Hans Island. Here’s a link to a CBC News article.

Enter your email address below to subscribe and stay up-to-date on my latest posts!

Looking to start a blog? Earn a $25 credit towards a wordpress.com plan when you sign up using the affiliate link below!

2 thoughts on “What Countries Border Canada?” 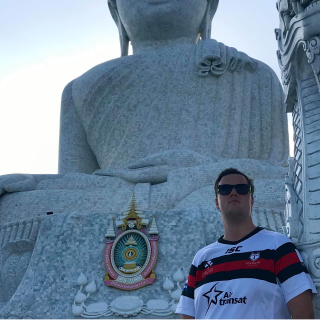 Hi, my name is Dillon. I’m a travel enthusiast from Canada who is constantly yearning for new adventures, new experiences and new places waiting to be explored. When I’m not studying I like to play guitar, hang out at the cottage, and day dream about all the places I haven't yet been to. Join me as I navigate my way through life, attempt to travel throughout the globe, and tell a few tales along the way. Thanks for stopping by, and safe travels!

My Redbubble Shop is Up and Running!

You’ll find everything from traditional canvas and metal wall art, to stickers, magnets and postcards, and even phone cases, throw pillows and clocks!

Columbia Packable Backpack Review (After 1 Year of Use)

I’ve had the Columbia Lightweight Packable 21 L Backpack for about a year now after purchasing it last January. In case you’re short on time, I highly recommend it. Here’s Why:

World Cup ’22: In Honour of Canada vs. Belgium

In honour of Canada’s World Cup journey, and specifically their opening match against Belgium, I thought I would share a few photos from my travels to Brussels and Ghent back in April of this year:

My Honest Ryanair Flight Review (Why it’s My Favourite Airline)

Compared to Ryanair, flying economy on any other airline feels like your being wined and dined and treated to such luxuries reserved only for the elite of the world. But that doesn’t mean there isn’t a lot to love about Ryanair.

The Cathedrals of Liverpool (Roman Catholic vs. Anglican)

I visited the Liverpool Cathedral 3 times during my time living and study at the University of Liverpool. Once by myself and another 2 times with visiting family and friends. Built in the gothic revival style of architecture, I think its fair to say the Liverpool Cathedral is a much more impressive structure than it’s Roman Catholic counterpart.